Tracing the Naturalization of Golden Oysters in the U.S.

My master’s thesis research deals with understanding the origin and spread of naturalized golden oyster mushrooms in the U.S. using population genomics. I have recently finished analyzing the 2017 dataset (I will publish results as soon as possible!), but  I am still collecting specimens on an ongoing basis for a potential follow-up study.  Please consider contributing golden oyster specimens to this important research!

If you have observed golden oysters in your area and you would like to contribute a specimen to my research, see Specimen Submissions below.

A BIT OF BACKGROUND

About 20 years ago, the golden oyster mushroom (Pleurotus citrinopileatus) was near impossible to find on the American market.  It’s native to subtropical hardwood forests of eastern Russia, northern China, and Japan, and has long been a popular culinary mushroom for cultivation across Asia.  Its sunny yellow caps make this species a show-stopper at farmers markets, and its popularity State-side has steadily risen over the years among specialty mushroom growers. 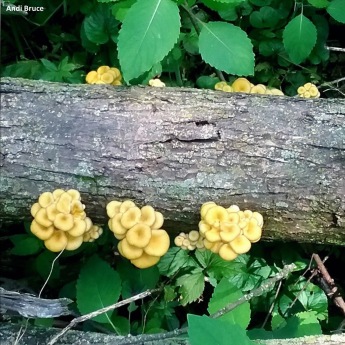 Today, it’s reasonably common to find golden oysters at American farmers markets during the summer, as it requires temps consistently above 60º F to fruit.  In Growing Gourmet and Medicinal Mushrooms, Stamets writes: “With the onset of commercial cultivation of these mushrooms adjacent to woodlands in North America, it will be interesting to see if these exotic varieties escape.”  I’d guess Stamets was spot on, but this is among the details regarding the mushrooms’ spread that my research seeks to confirm.  The first sightings of wild golden oysters in the US seemed to have occurred just about 6 or 7 years ago, following the rise in American cultivation of the species.  I have collected reports of sightings in Delaware, Illinois, Iowa, Maryland, Michigan, Minnesota, New York, Pennsylvania, and Wisconsin.  (Am I missing a state?)

The term “invasive” can be defined in many ways.  Ecologist Dr. Elena Litchman defines invasive microorganisms as those which proliferate in a new range and impact local communities or ecosystems.  This description leaves little doubt that golden oysters indeed fall under the category of invasive.  We would be rather negligent to assume that the rapid spread of any non-native species would be inconsequential to native ecosystems.  The golden oysters’ swift spread suggests that the native decomposers are being outcompeted and displaced.  Climate change and habitat loss already pose major threats to fungal biodiversity, so it’s critical that we understand the role non-native fungi play in deepening those threats.  Fungi provide vital ecosystem services as a part of diverse microbial communities, and ecological studies have shown that losses to biodiversity, or reductions in species richness, have negative effects on ecosystem function. 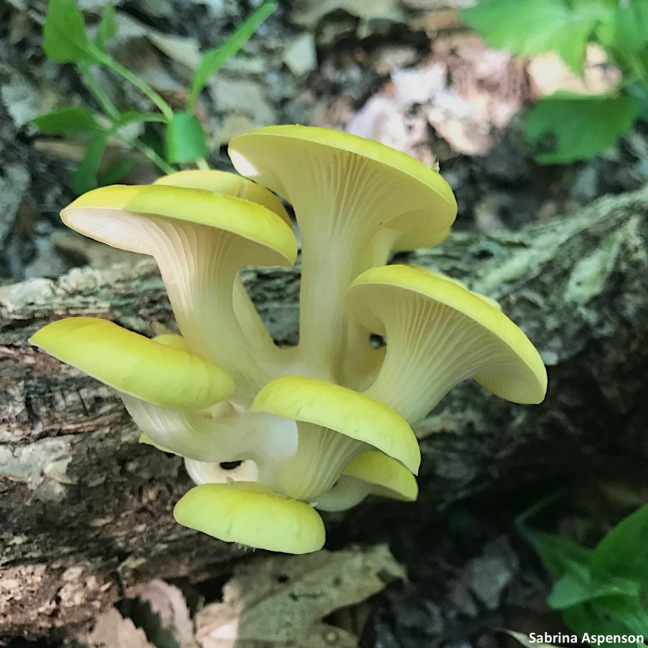 Although outdoor cultivation is common practice, this is the first ever case of escape with rapid and significant spread of a cultivated mushroom.  I’m using genomic data (the entire DNA sequence of every specimen, rather than targeting specific gene regions) to analyze the ancestral lineages of our samples, allowing us to get a better understanding of the mechanisms behind their spread.  This sort of information will help us understand how humans have influenced the spread of golden oysters, and may provide a starting block for the development of mitigation procedures.

My research seeks to answer the following primary questions: (a) Are wild strains genetically similar to commercial strains used for cultivation in the U.S.?  (b) Was there likely one introduction event, or multiple?  (c) Do the populations appear to be spreading clonally, or is there evidence for recombination?

I have recently finished analyzing the 2017 dataset (I will publish results as soon as possible!), but  I am still collecting specimens on an ongoing basis for a potential follow-up study.  Please consider contributing golden oyster specimens to this important research!  More details below. 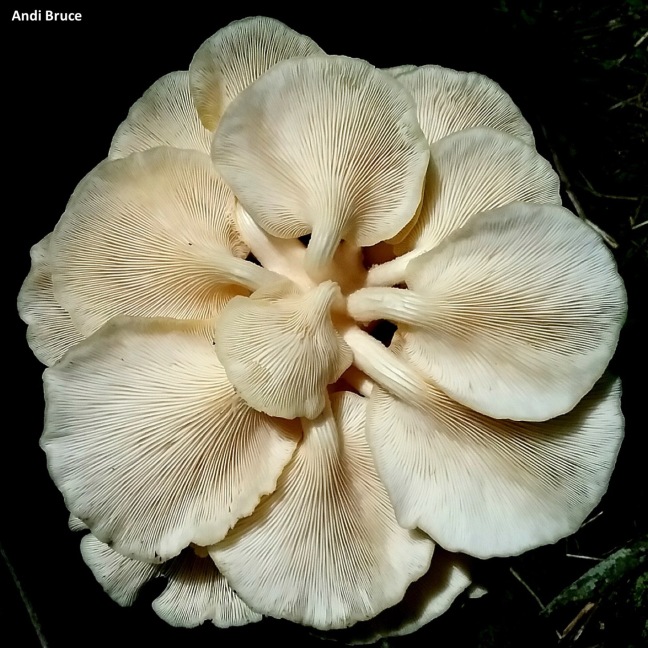 WHAT YOU CAN DO

Keep your eyes peeled and report sightings here!  To submit specimens for future study, please follow the instructions below.  Golden oysters have bright yellow caps when young, which fade to nearly white with age, and have a characteristic depression in the top of the cap.  The white gills run all the way down the length of the white stems.  Like other oyster species, they grow in clusters, and seem to prefer dead elms and other hardwoods.

If you’d like to contribute a specimen, please send both dried mushrooms and a spore print.  Please do not send any fresh mushrooms!  If we wind up using your specimen, your name will be acknowledged in any publication that comes out of it.

Larger specimens are best, but little mushrooms are just fine.  Drying mushrooms is best done using a food dehydrator on a low temperature setting.  If you don’t have a food dehydrator, you can use an oven on its lowest temperature with the door propped open a few inches (even better with a fan pointed at the door).  Care must be taken with ovens because the goal is to dry the mushroom without cooking it, which would damage the DNA.  Drying time will vary.  Let the mushrooms continue drying until they are crispy; if they are leathery or flexible at all, they have a bit more to go!

Instructions for taking a spore print:

Place a few caps on aluminum foil and cover (upside down bowls or Tupperware work nicely).  Leave them for a minimum of a couple hours, or overnight.  Then, remove the cover and the mushrooms (discard), taking care not to touch or smear the spore print.  There are often puddles of condensation that have formed—make sure to allow any moisture to dry before folding up the aluminum foil and include with the dried sample.  It may be hard to see, but the spore print will be a pale pink color.

Please include detailed information about where and when it was collected.  GPS coordinates are great, otherwise the name of the area/park/woods/street address, the city, and state is good information.  Please also include the date it was collected and the type of tree it was growing on, if you know.

Specimens can be sent to:

This research wouldn’t be possible without your assistance in the field and your willingness to contribute. You are truly helping to advance the science, and I’m very grateful for your help!